Here is an electron diffraction outcome from Bach, et al., 2013, that shows each of many thousands of electron outcomes  of 600eV electron precursors passing through a double slit. The slits are each 50 nm wide and 280 nm apart and the 600 eV quantum electron has a radius of 50 nm. The classical electron has a charge radius of 2.8e-6 nm and so classical electron precursors would just show two ballistic patterns. In fact, a single slit apparently shows a ballistic pattern but in fact, even a single slit shows an interference pattern for quantum electrons. A higher resolution experiment will also show single slit diffraction and in fact, there is never really a classical electron.

A simplified schematic of the experiment shows the 600 eV electron source, the Si3N4 double slit, a mask, and the electron detector outcomes. This schematic does not show the details of collimation and focusing, which are actually important for the results. The classical electron precursor would show only ballistic electron outcomes as (b) shows for each slit. The quantum electron shows shows an interference pattern outcome as (c) and so the quantum mystery is that an electron going through one slit knows somehow about the other slit.

In fact, the electron also shows interference even with a single slit or even with an edge like the mask edges in (a). Single slit or edge interference outcomes simply occur on a different experimental resolution than the double slit experiment. Thus, an electron is never really ballistic at all because even a single electron will always interfere with itself at a edge, in a single slit, in two slits, and even in the many slits of a diffraction grating.
A very simple classical notion defines an electron as its charge radius at 2.8e-6 nm, which is just a spike on the nanometer scale as the plot below shows. The electron charge radius is only for an electron at rest and of course an electron is never really at rest as the quantum mysticism deepens. Any real electron has some momentum distribution and so the semiclassical 600 eV electron shows dispersion of its momentum at 600 eV and so actually has a 50 nm radius. Already we find that quantum mysticism creates nonlocality and smears 600 eV electron mass out over 50 nm. 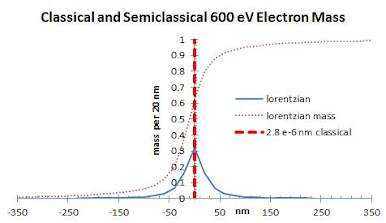 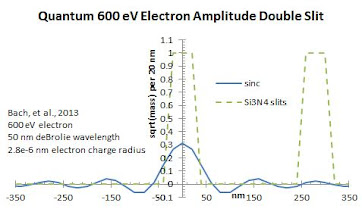 Quantum mysticism also smears electron mass, which is the square of mass amplitude, and so there is no negative mass as the next plot shows. However, quantum mass does still have extra little probabilities over the Lorenzian plot of a Drude oscillator shown above. 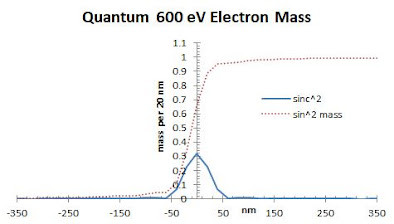 The classical determinism of gravity relativity associates a well defined path, a geodesic, through space and time for an electron. Classically, an electron can only pass through one slit or the other slit shown in the quantum amplitude plot. Thus a classical electron only carries one dimension of information as its momentum. A 600 eV classical electron would not show any dispersion and would always behave as a point charge.
However, quantum mysticism smears the 600 eV quantum electron mass amplitude over space and time. This means that a quantum electron shows dispersion and carries two dimensions of information as both amplitude and phase. While a classical electron mass passing though one slit has no way of knowing about the double slit, a quantum electron amplitude passes through both slits. While the double slit does not change the electron momentum or mass, the double slit does change the electron amplitude phase or dispersion.
Quantum mysticism bothers many people because despite well-defined quantum matter outcomes from action, we cannot really be certain about quantum matter amplitude precursors. Instead of the certain geodesic matter action commuting precursors of gravity relativity given well-defined and commuting outcomes, quantum mysticism shows that precursor matter and action do not commute.
Quantum matter action represents a very different microscopic nonlocal universe of reversible time that is inconsistent with the macroscopic localized universe of irreversible entropy and gravity relativity. Quantum matter action of a discrete pulse universe shows that quantum gravity relativity carries only the momentum information of space and time. Since space and atomic time both emerge from matter action, this quantum gravity is consistent with the quantum phase of matter that carries information as two dimensions of matter amplitude and phase. The universe of just the two dimensions of matter and action along with quantum phase provides a basis for all matter and all action.