One of the great accomplishments of Western Civilization is the U.S. Constitution. Often touted as an insightful statement of inherent human rights, the Constitution enshrines certain God-given rights as life, liberty, and the pursuit of happiness. The Declaration of Independence along with the Constitution and its outcomes of laws and precedent have really become our shared civic religion. Morals and ethics are something, just like any religion, in which people must simply believe.

Thus the Constitution represents both a secular as well as a civic religious faction much like the many religion factions that also make up Civilization. In fact, the Constitution enshrines the many factions of co-equal government and the Federalist Papers describes in great detail the purpose of those factions. Religions like Christianity have a long history of factions, called heresies, and the great Schism of 1054 was just such a faction that resulted from a rebellion against the tyranny and corruption of the Roman pope. The later Reformation of 1644 was then another rebellion against the intolerance and corruption of Rome and the outcome was the many factions that increased the tolerance and therefore limited the flaw of sanctimony with more diverse belief. 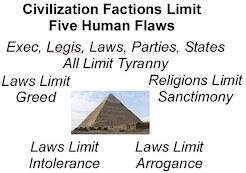 The faction conflicts of Civilization excite five human desires each with their measures:

4) Well being; per capita GDP, leisure;

The five human desires also represent excesses that are the five human flaws that the factions of Civilization inhibit:

1) Tyranny resulting from an excess of power and fame;

2) Sanctimony that results from an excess of religion or education;

3) Arrogance that results from an excess of pleasure;

4) Greed that results from an excess of well being;