Twelve Attributes of a Theory of Everything 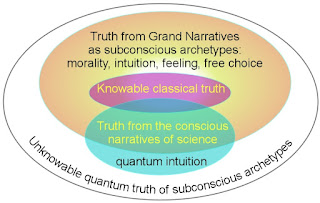 There are many partial theories of everything and only one complete theory of everything in the matter action of quantum phase. For example, two very important transcendent attributes of a TOE deal with nonexistence and what is unknowable. Gödel's incompleteness theorem shows the limits of matter action as what can be known and is a direct result of transcendence of what cannot be known.

The following twelve attributes then rank theories of everything for their completeness only from what Science can know.

1) Terminology: New TOEs tend to use confusing terminology and so it is helpful to map each TOE interview into some sort of common framework. Inconsistent TOE terminology simply causes confusion of terminology that then can then hide with identities where the TOEs are not really complete. These rabbit holes can be quite deep and keep in mind that mostly what TOE's reveal are identities, not truths.

For example, matter is what makes up the universe, action is how the matter changes, and both matter and action oscillate with quantum phase. These are simply axioms and so answer questions as identities, but any other terms for matter or action will have the same meaning.

2) Matter: It is very common for philosophers like Kastrup and Hoffman to define terms in way that complexifies their underlying concepts. Kastrup's one mind, for example, is really a redefiniton of the matter that makes up the universe where Hoffman used a network of minds for what makes up the universe. Science today really uses the Casimir vacuum to make up the mostly empty universe with only a little matter here and there.

3) Action: Always look for a way to change the stuff of the universe. Kastrup uses the action of dissociation to break up the one mind into many minds and there is a further bonding of the pieces with vibrations and resonances. Hoffman uses the action of conscious agents in a similar way. Science uses actions from gravity and charge as well as neural action potentials to change matter and any TOE must then account for gravity, charge, and neural action. The strong and weak nuclear forces are just part of exchange bonding of charge force in this approach and so do not require any separate action.

Thus, action is the complement of matter.

4) Quantum Phase: Of course, any TOE must have quantum phase and you should always look for how a TOE deals with quantum phase. Kastrup mentioned vibrational resonances in the one mind as being important, and so this is how he introduced quantum phase. Quantum oscillations have phase and with phase comes coherence, correlation, and interference.

Both matter and action oscillate with quantum phase, but are 90 degrees out of phase. This 90 degrees is the uncertainty principle as well as where the right angles of Euclidean space emerge. The Schrödinger equation embodies the nature of quantum phase.

5) Nonconforming: Any useful TOE will not conform to mainstream Science since Science is simply not complete. There is a strong tendency for pop scientists like Sabine to conform to the party line of Science. After all, if there ever were to be a workable TOE, that TOE would put her and a lot of other scientists out of work. Conforming pop scientists just cannot really break from the party line and so their TOE's are not that useful.

The universe as a quantum causal set with precursors and outcomes is a very useful approach. In fact, both Katrup and Hoffman define causal sets, but use much different terminology.

8) Arrow of Time: Every TOE must explain both the irreversibility of relativistic determinism as well as quantum reversibility. Of course, these issues are simply not clear in Kastrup or Hoffman.

With the advent of continuous spontaneous localization (CSL), it is the irreversible decay of quantum phase that differentiates macro relativity from micro charge.

The Hasse diagram below shows this.

10) Falsifiable: Without measurements that will falsify a TOE, the TOE is simply made up of identities and is of little use for prediction.

11) Constants: There must be constants for a TOE like mass, action, force, energy, etc. Without constants, a TOE is not useful for predictions.

Science today simply accepts the many measurements that Science cannot yet explain like galaxy rotation, decay of matter as the IPK, decay of pulsars, and so on. Matter action does explain these and many other things, but matter action is subject to validation or even falsification by more careful measurements. 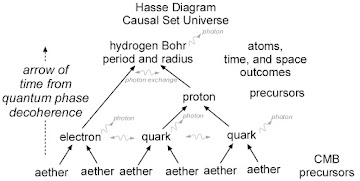 Protons are actually made of three quarks and the Feynman diagram for the proton is completely reversible. However, once the universe decay reaches the CMB, the process freezes and proton coherence decays. Thus, we do live in a causal universe, which means that every proton outcome has precursor aether. Proton outcomes are still not determinate, though, and there is some every slow proton decay.

If free choice exists, the universe is not determinate and so determinism would necessarily exclude free choice. Determinate people often say that while free choice does not exist, they still prefer to believe in the illusion of free choice. This is because personal responsibility for action is at the root of Western Civilization.

There are thing in the world that simply are not knowable, but those things do exist. Correspondingly, there are many questions that have no answers, but it is not always possible to know. For example, “Why is there free choice?” has no answer but “Is there free choice?” may or may not have an answer. Therefore, an inescapable part of reality is an ability to transcend the unknown of quantum phase.